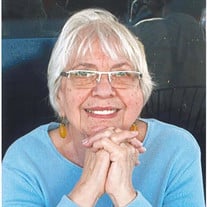 Virginia “Ginny” was born December 27, 1930 in Illinois, to Otto and Elsie Schaefer and passed away peacefully on Tuesday, August 17, 2021. She lived in the South St. Louis area most of her life and was married to Linus Macke for 42 years. She was preceded in death by Linus and her older brother Marvin, and younger sister, Mary Jane. Linus and Ginny had 8 children; Alan (Darlene), Pam Thomes (George), Lana Goodin (John), Carleen Morris (Guy), Susan Kavanaugh (Timothy), Julie, Greg (Sabine), and Terea (Jim). She was also a big sister to Gerry, and beloved by her many grandchildren, great grandchildren, and friends. Ginny was a strong proponent of mental health and was particularly passionate about primal therapy and having “big” feelings. She always made herself assessable to “sit” for people struggling with their own feelings, and her own perception of their struggle. She delighted equally in laughter and tears. She lived in Los Angeles and Venice Beach between 1984-1994, where she was involved in the primal institute, contra dancing and worked for the summer Olympics in 1984. She loved music and had an alto voice that contributed to harmonies in the Our Lady of Sorrows choir and with the Sweet Adelines. She traveled to Hawaii and Australia. She was described as a “character” and was highly spirited for a woman of her time. She was a fabulous cook and could make a frugal dish into a tasty, healthy delight (soups in particular). She kept her family and visitors well fed. Her colorful appearance often included the coordination of her plethora of scarfs, hats, and jewelry. She was an avid reader and would often distribute articles that she perceived might help others. In later years, she resided at Delmar Gardens - Meramec, where she was an active participant in singing, playing bingo and Rummikub. A Celebration of Life ceremony is planned for 12:00pm-4:00pm on Sunday, August 29th, at Jay B. Smith Funeral Home in Fenton. Masking Recommended. In lieu of flowers, donations can be made to the charity of your choice.

Virginia &#8220;Ginny&#8221; was born December 27, 1930 in Illinois, to Otto and Elsie Schaefer and passed away peacefully on Tuesday, August 17, 2021. She lived in the South St. Louis area most of her life and was married to Linus Macke for... View Obituary & Service Information

The family of Virginia "Ginny" J. Macke created this Life Tributes page to make it easy to share your memories.

Send flowers to the Macke family.