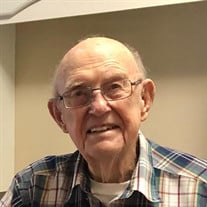 Victor Bernard Rueschhoff passed away peacefully at age 99 on Wednesday, February 9, 2022. He was a native St. Louisan, born to Elsie (Franke) and William Rueschhoff on November 17, 1922. He lived a long-fulfilled life and will be deeply missed. Victor was beloved husband of the late Lecora (“Lee" Bazan), and father of Gary William Rueschhoff. He is proceeded in life by brothers: James, Jerome, Paul, Robert, and William and sister: Colette (Stelman). He is survived by brothers Al and Tom and sisters Cecilia (Brandt) and Betty (Angeli). Vic was a loving uncle and great-uncle to many. He was a dear and special friend to neighbors Dan and Jane Tihen, and friends Grace Klemme and Danae Charalambous. Vic was light-hearted and outgoing with a great sense of humor. He had a rich grin, always joking and teasing. Vic never let another man down. He fulfilled every obligation he ever undertook. His word was his bond, and everyone knew it. We never heard him utter a lie, nor intentionally deceive. Vic was the most kind and loving father, and teacher of all things. His method was simple. He taught by example and his teachings are endless. We learned something new every day with him. Vic was a WWII veteran and often told his wonderful stories of serving his country and searching for his brother William’s grave, traveling through Germany, Austria into Italy. Vic was married nearly 50 years and enjoyed life to it’s fullest. For years he spent weekends on a houseboat on the Mississippi River with Lee and Gary. Vic also loved hunting and fishing and often partnered with Gary for adventures. Vic was a union carpenter, a member of Local 92, in St. Louis. From his education to his career, from his skill with every kind of tool that he had, Vic engaged the world as a man who would be its master. Vic was proud to be a carpenter and hoped more individuals would follow in the footsteps of his. Later in life, Vic continued to be quite active and involved, never sitting still. He worked at a vacation dude ranch at the age of 82, Yee-Haw! For years, he danced with friends, often three times a week. He had a sharp mind and quick wit, loved to play card games and dominoes. He was quite the competitive gin-rummy player with his daughter-in-law, Donna McLaughlin. There are so many things to say about Vic, but we all can agree, he was loved by many and will be deeply missed by all. Full Military Honors for Vic will be held at Jeffeson Barracks. Family gathering will be at noon at Andres, 4254 Telegraph Road. In lieu of flowers, donations may be made to: Salvation Army at www.salvationarmyusa.org

Victor Bernard Rueschhoff passed away peacefully at age 99 on Wednesday, February 9, 2022. He was a native St. Louisan, born to Elsie (Franke) and William Rueschhoff on November 17, 1922. He lived a long-fulfilled life and will be deeply missed. Victor... View Obituary & Service Information

The family of Victor Bernard Rueschhoff created this Life Tributes page to make it easy to share your memories.

Victor Bernard Rueschhoff passed away peacefully at age 99 on...

Send flowers to the Rueschhoff family.