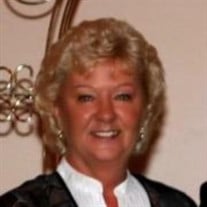 Vickey Lee Burch, age 71, left us far too soon on the evening of December 14th, 2020. She was a strong woman - fighting hard until to the end, staying with us a little while longer to keep us all in line. She passed amongst friends and family in her home in Leasburg, MO. Vickey Lee was born in Mountain Grove, Missouri on October 23rd, 1949 to Virginia Lee Graven (nee Doty) and Victor Charles Graven. Vickey’s sister Connie was born June 20, 1953. Virginia Lee then married Ed Nelson, and Vickey and Connie welcomed their stepbrother Sonny Nelson and brother Patrick Nelson. Vickey married the love of her life, the late Michael Leslie Burch, in 1968, and loved it so much she married him again in 1978. With Michael Leslie Burch, Vickey became stepmother to the late Michael A. Burch. Vickey and Michael Leslie Burch celebrated the birth of their son Matthew Leslie Burch on November 3rd, 1981. Vickey became a proud and beloved grandmother on November 20th, 2013 with the birth of Evie Lou Burch, and then again on April 6th, 2015 with the birth of Emmerson Olive Burch. Vickey was also grandmother to Michael A. Burch's children Craig and Chelsea Burch. Vickey Lee loved socializing with friends, shopping, playing games, watching movies, spending time with family, genealogy, cooking, and the beach. Her passions evolved through the years, but the one constant was her willingness to help other people, especially those closest to her. Vickey's helpful hand touched all of us and taught us lessons that will be passed down for generations. Her light in this world may not shine as brightly now that she's gone, but so long as we keep her memory alive, her light will never be dim. Vickey is survived by her brother Patrick Nelson, sister Connie Babe and her children Billy Florea and Angie Sauer, son Matthew Burch and her daughter-in-law Wittney Swyers-Burch, and grandchildren Evie, Emmerson, Chelsea, and Craig Burch. Later in life, Vickey became close to Mike Chandler, who spent nights with Vickey talking, playing games, and enjoying each other’s company. Family and friends are invited to the home of Vickey Lee Burch to celebrate her life. The date will be in the Spring, and you will be expected to bring and share your best and funniest memories of Vickey Lee! For your life and all that you have done for me and my family, I will remember you not for how you left us, but for how you lived. I hope to be half the person you were. With love and adoration, Your son, Matthew

Vickey Lee Burch, age 71, left us far too soon on the evening of December 14th, 2020. She was a strong woman - fighting hard until to the end, staying with us a little while longer to keep us all in line. She passed amongst friends and family... View Obituary & Service Information

The family of Vickey Lee Burch created this Life Tributes page to make it easy to share your memories.

Vickey Lee Burch, age 71, left us far too soon on the evening...

Send flowers to the Burch family.