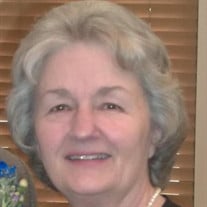 Trudy Smith, 77, of High Ridge, Missouri passed away on April 29, 2021. She was born Gertrude Ann Osburg on September 4, 1943 in Dayton, Kentucky but was known as Trudy, Mom, Grandma, or “G” to those who loved her most. Trudy grew up in a large Catholic family in Newport, Kentucky with seven siblings and remained a life-long Catholic. She graduated from Academy Notre Dame of Providence High School in 1961. At age 15 she was introduced through mutual friends to Stephen A. Smith of Bellevue, Kentucky. After a seven-year courtship, the two were married on September 18, 1965. Trudy dedicated her adult years to making a home for her husband Steve and their four daughters. During their early married years, the couple lived in Brussels, Belgium where Steve worked for a company called Nimrod. During this time they traveled throughout western Europe. Upon their return to the United States in 1968, they lived in Cincinnati and later Fairfield, Ohio. In 2001 they relocated to Missouri to be near their daughters and grandchildren. Steve worked as treasurer for L. Keeley Construction based out of St. Louis for nearly 20 years. Trudy was a dedicated homemaker and supporter of her children’s education. She served as “room mom” for each of her daughters during one of their elementary school years, planning class parties and events. She drove endless hours transporting her girls to school clubs and events as well as extracurricular activities. After her daughters were out of the house, Steve and Trudy hosted a foreign exchange student, Tamás Brányi of Hungary, for a year. Nearly thirty years later, Tamás said of Steve and Trudy, “They are my second parents…” Trudy could most often be found in the kitchen or in the yard. She prepared home cooked dinners, cookies, cakes, and desserts. Her specialty was decorating cakes for every birthday or momentous occasion. If there was a family event, Trudy was there with a cake, a tray of cookies, her signature barbecue and coleslaw, or broccoli and cheese casserole. She was quite the gardener and enjoyed tending to her array of flowers. Roses were her favorite. Trudy was also the go-to hairdresser among family members for a haircut or a perm. She took pleasure in sharing her many talents with family and friends. Additionally, Trudy enjoyed reading, photography, sewing, painting, scrapbooking, making crafts, and doing needlework. The Barbies and American Girl dolls owned by her daughters and granddaughters were the best dressed in town. Trudy had a flair for making every holiday a special occasion with decorations throughout the home. She also had an extensive collection of owl figurines that could be found around the house as well as Santas at Christmastime. Trudy devoted her time to family life. She planned memorable family trips including an RV cross-country journey to the west coast with many stops along the way, visits to Disney World and Chicago, and annual family reunions at Butler State Park in Kentucky. Once her children were grown she enjoyed visits to Alaska, North Carolina, Tennessee, and Colorado, where they lived over the years. Regular trips to Bed and Breakfasts in Indiana and Branson, Missouri were taken with her siblings. She enjoyed playing cards and board games. Favorites included euchre, canasta, “Oh,Heck!”, Scrabble, Ticket to Ride, and Clue. For nearly 15 years Trudy and Steve attended endless sporting events, band and choir concerts, robotics tournaments and more to cheer on their grandchildren. They were even known to show up and build a snowman to surprise their grandkids on a snow day, and Easter egg decorating competitions were an annual event. Trudy’s more recent hobbies include participation in Postcrossing, in which she sent and received postcards from all over the world. In the past year she regularly connected with family through Zoom events like a virtual Easter egg decorating contest, a Disney sing-a-long viewing party, and regular Bingo nights. She routinely responded to a call of “B-4” with, “Before what?” The following quote from Erma Bombeck was found in Trudy’s handwriting in her bedroom dresser, “When I stand before God at the end of my life, I would hope that I would not have a single bit of talent left, and could say, ‘I used everything you gave me.’” It is evident that she used every bit of talent God gave her during her time on this Earth. Trudy was preceded in death by her parents Franklin C. and Nell (Diehm) Osburg and siblings Margie Whitehead, James Osburg, Fred “Oz” Osburg, and Ted Weiner. She is survived by husband of over 55 years Stephen A. Smith of High Ridge, Missouri; daughters Karen (Barry) Galloway, Margie Smith, Nancy (Bruce) Johnson, and Vicky Herbel; siblings Rev. Frank “Bud” Osburg, Sister Claire Osburg, and Pearl (Neil) Leonard; nine grandchildren, two great grandchildren, and numerous nieces and nephews. A funeral mass will be held at 11 a.m. on Tuesday, May 4 at St. Anthony of Padua Catholic Church, 3009 High Ridge Blvd., High Ridge, MO 63049. Visitation will be from 6-8 p.m. on May 4 at Jay B. Smith Funeral Homes, 777 Oakwood (at 141), Fenton, MO 63026. A memorial service will be held in northern Kentucky at a later date. In lieu of flowers, donations can be made to: www.chosenwithamission.com Chosen With a Mission 1702 Carney Winters Road Ashland City, TN 37015 This is a nonprofit founded by Trudy's daughter Nancy, supporting an elementary school in Matugga, Uganda.

The family of Trudy Smith created this Life Tributes page to make it easy to share your memories.

Trudy Smith, 77, of High Ridge, Missouri passed away on April...

Send flowers to the Smith family.