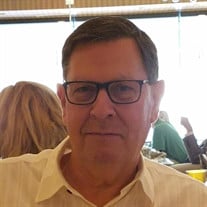 Stevan Kim McCarthy, Sr., born in Larned, KS, July 24, 1946, passed quietly at his home in Ballwin, MO on September 25, 2020. Son to Betty (McCarthy) Sawyer and Harold McCarthy and beloved stepfather Howard Sawyer. Loving husband to Beverly Knievel. Father to Stevan (Jill) McCarthy Jr., Lori McCarthy, and Bonni (Luke) Olson. Grandfather to Lauren, Amber, Tony, Michael, and Olivia. Great-grandfather to Payton and Skylar. Brother to Sherry (Russ) Miller, Kris (Walt) Powell, Joe (Nettie) Aufenkamp, the late Britt (Pam) Aufenkamp, Dot Sawyer, Ann (Craig) Danner, the late Bruce Sawyer, and the late David Sawyer. Brother-in-law to Fred (Marlene) Knievel, Patricia (Larry) Harmon, John L. (Jeanne) Knievel, Mary Jo (Bruce) Dinslage, and the late Nicholas Knievel. As a young man, Steve spent 3 years in the Navy and was a proud Vietnam vet. He met his wife Bev while working at the Omaha airport. Early in their married life, he managed/operated a gas station/auto repair shop in Cook, NE. He was a Pepsi delivery driver when he lived in Grand Island, NE, and made the front page of the newspaper when a photographer caught him sweeping up bottles from the street after he went around a corner with the door open. Oops! Thank goodness they were empty! His boss said he couldn’t have bought better advertising. He drove for Roadway Express for about 15 years, but had to retire due to a back injury. Forced to find a different line of work, he got into the cell phone business when it was just becoming popular, and it provided a good living until he retired and moved to St. Louis in 2012. He grew up in Nebraska, so was a long time Husker fan and went to a Husker game whenever possible. Fan that he was, he even dedicated a corner of the cell phone store to Husker merchandise and memorabilia. He enjoyed St. Louis Cardinals baseball and was able to attend some of the games after moving to St. Louis. He discovered his Navy ship, USS Neches AO-47, had a reunion of shipmates annually. He attended his first one in Baltimore, MD in 2006 and enjoyed many more reunions thereafter. He liked to travel, and enjoyed several vacations in Mexico resorts—when he could talk Bev into it. He was a good man who loved the babies and was a favorite among his nieces and nephews as they were growing up. He loved his Irish music, with the occasional country song mixed in. Several months before we learned of his brain cancer diagnosis, he and Bev got to celebrate 50 years of marriage at a beautiful anniversary party with their family and friends.

The family of Stevan Kim McCarthy Sr. created this Life Tributes page to make it easy to share your memories.

Send flowers to the McCarthy family.