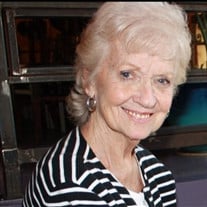 Shirley Lou-Dee Dean 4/19/1938 - 8/24/2021 Shirley Lou-Dee Dean, 83, went home to Jesus on August 24, 2021 surrounded by her family. Visitation will be held on Monday, August 30 from 3-7p.m. at Jay B. Smith Funeral Home in Fenton with a funeral service immediately following at 7p.m. Shirley, born April 19, 1938, to the late Bonnie and Ed Gossett, in Ellington, Missouri and is survived by her brother Ed (Ruth) Gossett and sister in law (Sandy) Preceded in death by her brother Steve Gossett and sister in law (Shirley). She was an avid water skier, pianist, and, in her younger years, scuba diver. Shirley was also a gold medalist in volleyball in the Senior Olympics. Perhaps best known for her famous cheesecake, she was often in her kitchen at home or in her lake cabin baking and cooking for her family. Shirley was married on Sept. 10, 1955, to the love of her life, the late Bob G. Dean. Together they were blessed with three children: Tracy (Jeannie) Dean, Randy (Sue) Dean and Kelley (Jim) Klestinske. Shirley was known as Grandma Dean to six grandchildren: Krissi (Tim) Timmerman, Doug (Katie) Dickmann, Brittney Dickmann, Danny (Jackie) Dean, Bobby Dean and Kaylee Klestinske. She was known as Grandma Shirley to nine great grandchildren: Alexis, Luke, Grace, Rhys, Jacob, Caroline, Chloe, Collin and Olivia. She was the beloved Aunt Shirley to so many. She was truly the Godly woman of Proverbs 31:26-31. She was rarely without her Bible or Hymnal nearby and constantly prayed over her children and grandchildren modeling Christ daily. Her greatest joy was spending time with her family. Their greatest joy was spending time with her. She will be missed more than words can express.

The family of Shirley Lou-Dee Dean created this Life Tributes page to make it easy to share your memories.

Send flowers to the Dean family.