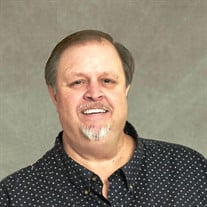 Roy James Swickard Jr. April 16, 1962 – April 4, 2020 On April 4, 2020, Roy James Swickard, Jr. went home to be with the Lord and Savior that he loved so much. He is survived by his loving wife of 37 years, Cindy Renee Swickard (nee Sampier). Also survived by their four children Charlotte Renee Wagner (nee Swickard, husband Charles, son Samuel), Caleb James Swickard (wife Kelly, son Gavin), Joshua Luke Swickard and Daniel Timothy Swickard. His children affectionately referred to him as “Papa Bear”. He was born April 16, 1962 in Lawrence, Kansas to (the late) Roy James Swickard Senior and Virginia Marie Swickard (nee Fudge). He is also survived by his brother Troy Swickard (of Camarillo, CA), Shelly Redford (nee Swickard of Ozark, Missouri) and Brent Swickard (of Nixa, MO). As a child, Roy moved between Lawrence, KS and Oxnard, CA while his father was in the Air Force. They lived, briefly in Columbus, OH until settling in Oxnard, CA where Roy stayed until he graduated from Rio Mesa High School in 1980 and followed that by enlisting in the United States Air Force at the age of 18. In the Air Force, he was an Avionics Component Repair Specialist (CRS). In 1982, he married Cindy Renee Sampier, to whom he’d had the absolute pleasure of knowing since toddler-hood. Their “happily ever after” began with Roy stationed in Bitburg, Germany where their, one and only, daughter Charlotte was born. In 1985, he was transferred to Ft. Walton Beach AFB, where they remained for two years, until he got out of the military. Their travels took them to Oxnard, CA where Caleb was born in 1987. Next was Hesperia, CA where Joshua was welcomed in 1990. After four years, the family moved to Clovis, NM where Daniel joined the family in 1995. From Clovis, the family’s biggest adventure took them to Khamis Mushayt, Saudi Arabia for two years and then to San Diego, CA. In 2004, Roy, Cindy and their boys moved to St. Louis, MO, where Charlotte would eventually joined with them (in 2007) and made it their “forever” home. Roy loved to travel and experience new cultures and countries, always excited for the next chapter. He would always say, “God brought us to Missouri for a reason” and the reason was clear to him. His family. Charlotte found Charles and Caleb found Kelly. The family grew and he became the best “Papa” to his grandsons. Roy had the utmost respect for his country and exhibited patriotism, beyond his military service. He loved air planes, namely the F-15 Eagle and everything about flying. He also loved ALL sports. From football to baseball to cricket and everything in-between. He particularly loved the Kansas City Chiefs, Kansas City Royals and “The” Ohio State Buckeyes. Aside from his wife, Cindy, Roy’s greatest love was music and worshiping God. He spent his life writing songs that glorified God and playing his guitar. He felt most at home when he was singing praises to God and playing on the worship team at church. He was a part of the worship team and on the board of his church, New Hope Fellowship, where he and Cindy are members. Roy was loved by many. His smile was infectious and his dad jokes were infamous. Roy spent his life with a fierce love for God and served the Lord with all of his heart. He and Cindy raised their children in a God fearing home and he continued praying for each of them, every day, until the day he met Jesus. He will be missed greatly, but he is in Glory doing what he loved to do best, praising his Savior. A memorial service will be held at New Hope Fellowship. Service details will be made available at a later date.

The family of Roy James Swickard Jr. created this Life Tributes page to make it easy to share your memories.

Send flowers to the Swickard family.