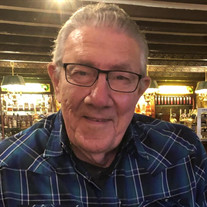 Robert Emerson Moffat, Jr. September 15, 1938 ~ July 11, 2021 Robert Emerson Moffat, Jr., 82, passed away peacefully at 3:37pm on July 11, 2021 at his home in Fenton, MO surrounded by his loving family. Robert (Bob) was born on September 15, 1938 to Rebecca Jane and Robert E. Moffat, Sr. In St. Louis, MO. The family lived in Sikeston, MO, Farmer City, IL, Decatur, IL and later moved to Clinton, IL where Bob grew up and met his bride, Elizabeth Ann (Gardner) Moffat. He and Liz moved to California shortly after they were married and lived in San Diego and Menifee, California for many years. After his beloved Liz passed, Bob moved back to Missouri and enjoyed living in Fenton. Bob and Liz were blessed to celebrate 52 years of marriage before her passing in 2011. Bob was preceded in death by his wife Liz, his parents Robert and Rebecca Jane and his brother Thomas Rhoades. Bob, a beloved father of his only child Stephanie Jane Little (Todd), loving grandfather of Robbie Reed (Alexis), Allison Lopez, Jordan Reed and cherished great-grandfather of Hunter James Lopez, Emma Leigh Reed and Cole Byron Lopez all of Atlanta, Illinois. He was a dear brother to Carl Moffat (Carol) of Fenton, Missouri. Bob was also a loving brother-in-law to Mary Freeman (Carl), Arvetta Parrish, Steve Gardner and Dan Gardner (Sharon). Loving uncle to many nieces and nephews and a wonderful friend to many. Bob will be greatly missed by all who knew and loved him. Bob graduated from Wentworth Military Academy in Lexington, Missouri and then served in the United States Marine Corps from 1958-1964. After his honorable discharge, Bob and Liz moved back to Clinton, IL where Bob worked for the City Police as well as the Sheriffs Department as a Deputy and an Investigator for the States Attorney, of which he had many great stories. After several years, Bob and Liz moved back to California where Bob worked for the Department of Defense as a Quality Assurance Engineer at North Island Naval Air Station in Coronado, California until he retired in 1993. After retirement, Bob thoroughly enjoyed working for the Del Mar Fairgrounds and Thoroughbred Club as a sergeant with the security department for many more years where he was highly regarded by his co-workers. He also enjoyed volunteering for the Department of Fish and Game and taught Gun safety classes. In 1958, Bob followed in his father’s footsteps and became a member of the fraternal order of Freemasonry as well as the Scottish RIte. He earned his 50 year pin, received various awards and held many ofﬁces as well as serving as Worshipful Master of his Lodge in Mission Bay, California. He was proud to attend Lodges in Mexico, Japan, the Philippines, Guam, Hawaii and Scotland. Bob also joined the Order of the Eastern Star and served alongside his wife, Liz for many years. He was proud to hold the ofﬁce of Worthy Patron multiple times as well as serving as Grand Sentinel in 2014. Bob’s hobbies and pastimes included woodworking and as many know, he has created some beautiful pieces. He also loved the sport of hunting and loved the various trips he took hunting elk, deer, wild boar, to name a few! He also loved ﬁshing, shooting and reloading as well as gun safety which he proudly passed on to his grandsons. Bob loved traveling, good food, spending time with his daughter Stephanie, her children and new grandchildren. A recent high point was when Stephanie was proudly able to take Bob to Scotland in 2019 to see the town of Moffat, which was on his “bucket list.” They even got to ﬂy First Class! Bob was very adventurous and in his younger years experienced ﬂying airplanes, skydiving, riding motorcycles, scuba diving (bringing home many abalone and lobster) and in his travels was able to go on multiple cruises to Mexico, Alaska and the Mediterranean where he and Liz got to ride camels. One of Bob’s favorite sayings that he would impart to others was, “In order to enjoy the view from the top of the mountain, you need to be willing to make the climb.” Bob climbed that mountain over the course of his life and is now enjoying the heavenly view with his beloved bride, Liz. Celebration of life with military honors will be held Monday, July 26, 2021. Meet at Jay B. Smith Funeral Home: 777 Oakwood Dr. Fenton, MO 63026 promptly at 12:30pm for the celebration of life service followed by a procession to Jefferson Barracks National Cemetery for the graveside service to begin at 2pm. Reception will follow.

The family of Robert Emerson Moffat Jr. created this Life Tributes page to make it easy to share your memories.

Send flowers to the Moffat family.