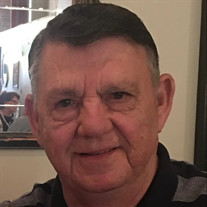 Richard “Rich” James Palmisano, 75, of Fenton, MO, born on June 1, 1945, in St. Louis, MO, died surrounded by his children on Wednesday, February 17, 2021. Rich was a proud Vietnam veteran, serving 2 tours during the Vietnam War as a member of the 1st Cavalry Division of the Army. During this time in the Army, he served in the infantry, delivering arms and munitions to American soldiers for battle. He earned several awards for his service, including The National Defense Service Medal, Army Commendation Medal, and the Bronze Star Medal. He was a marksman shooter, earning a rank of Expert M14 in this skill. After his honorable discharge in the Army, where he achieved the rank of SP5 Sergeant, he went on to begin a 31-year career with the Terminal Railroad Police in East St. Louis, IL. During his careers in the Army and with the Terminal Railroad, Rich saved the lives of at least 2 individuals, and he was honorably recognized for his bravery. He retired from the Terminal Railroad in 2005. Rich was a generous and outgoing person, and could easily make friends wherever he went. Everyone knew who he was at the places he frequented, and he would never hesitate to help a friend in need. He loved hanging out with friends and family, and would always tend to cook enough food to “feed an Army” whenever he was in the kitchen. His home was always open to all, and he loved having fun at a good get together. He volunteered countless hours with the American Legion Post 400 in Fenton, and could always be counted to assist with their Lenten fish fry Fridays every year, or to serve up a cold beer. His greatest accomplishment was his family, having raised two children (Anthony and Lisa) with his loving wife and partner, Pietrina. Together, they lived and traveled around the world, and were blessed with 50 years of marriage. He loved talking about his grandchildren, and they would light up when their beloved “Paw Paw” came into the room. His generous spirit, belly laughs, and warm hugs will be missed dearly by all. He was preceded in death by his parents, Edward and Antionette, nee DiMaggio, Palmisano; and brother Michael Palmisano. Rich is survived by his wife, Pietrina Palmisano (nee Caltagirone); his children Anthony (Rachel) Palmisano of Fenton, MO, Lisa (Jeremy) Greathouse of Fenton, MO; his grandchildren Noah and Grace Greathouse, and Jack, Mark, and Andrew Palmisano; his brother Edward (Dotty) Palmisano of Collinsville, IL; his sister Aggie (Kevin) Doe of West Alton, MO; and his brother Terry (Liz) Palmisano of St. Peters, MO; Goddaughter Kerrie Lynn (Jay) Garrett of Foristell, MO and Godson Steven Jesuit of Elgin, IL, as well as many cousins, nieces, and nephews. In lieu of flowers, donations may be made to the American Legion Fenton Post 400, or to Shriners Hospitals for Children. Visitation will be held on Thursday, February 25, 2021 from 4 to 8 pm at JB Smith funeral home, Fenton, MO. Rich will be laid to rest at Jefferson Barracks cemetery, with private burial services for the immediate family.

The family of Richard "Rich" James Palmisano created this Life Tributes page to make it easy to share your memories.

Send flowers to the Palmisano family.