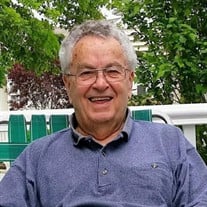 R.L. (Cubby) Baer went into the arms of Jesus on Tuesday, March 9, 2021. He was born in Peach Orchard, AR on January 26, 1928 to Roy and Lena Baer. Beloved husband of Clydia Baer (nee Clayton). Loving father of Rebecca “Becky” (Mitchell) Barker of Fenton, MO and Clydia (Andy) Gullion of Rock Hill, SC. Cherished grandfather of Kathryn Barker, Brianna Gullion and Joseph Gullion. Dear brother-in-law of R. J. Clayton. Uncle of Ida Hewett, Chris Stewart, Van Clayton and Donna Beaube. Cubby is a father-in-law, uncle, cousin and friend. When Cubby was under the Care of Nurses and Company, they made a story of the journey of his life. When he was a child, he fished, played baseball and basketball. His first job was a cotton picker and he was fired on his first day! Cubby has done men’s work since the age of 14 when he started working in the sawmill. Later he worked as a switch foreman at Missouri Pacific Railroad which became Union Pacific Railroad. He and Clydia Mae met when they were kids, he was 6 years old and Clydia was seven. Cubby had a tough childhood and was his own from age 7. In 1954 he was on the bank and saw Clydia Mae getting baptized. She inspired him to become a man of faith. He was saved and became a Christian. His testament to the world he shared on the boxcars. He would write “Jesus Saves” in chalk. Visitation will be on Sunday, March 14, 2021 from 1-3:00pm at Jay B. Smith Funeral Home, 777 Oakwood Dr., Fenton, MO. Service is immediately following at 3:00pm. Interment Monday at Lawrence Memorial Cemetery in Walnut Ridge, AR under the direction of Ermert Funeral Home, Corning, AR. Memorial contributions to Convoy of Hope, P.O. Box 1125, Springfield, MO 65801 would be greatly appreciated.

The family of R. L. (Cubby) Baer created this Life Tributes page to make it easy to share your memories.

R.L. (Cubby) Baer went into the arms of Jesus on Tuesday, March...

Send flowers to the Baer family.