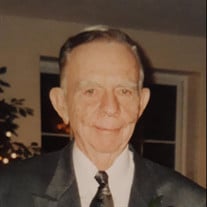 Perry "Neal" Browne, 97, born May 15, 1923 to William "Perry" Browne and Jesse Vivian Browne (nee Billingsley) on a snowy day in Denver, Colorado. Received into God's hands on Tuesday, November 24, 2020. Reunited in faith with his son James Douglas. He will be dearly missed by his wife Evangeline "Penny" Browne (nee Barkey). His children Jon (Lisa) Browne, Linda (Bill) Vedenhaupt, David Browne, and Susie (Larry) Hoyt. His cherished grandchildren: Chris (Molly), Justin and Paula, B.J., Tim, Emily (Michael), Drew (Vanita), Lauren (Mike), Graham (Stephanie), Jessie (Tim) and eleven beautiful great-grandchildren. His brother Don (Carolyn) Brown, sisters-in-law Jenny Hajek and Virginia Barkey, many nieces, nephews, cousins and friends. Neal served his country in the military as a B-17 pilot during WWII, his community through grocery and restaurant businesses, and God and family through his deep Christian faith. Neal and Penny have been members of the First Baptist Church of Fenton for over 65 years. A private family service will be held on December 2, 2020, 10:00am at Jay B. Smith Funeral Home, 777 Oakwood Dr., Fenton, MO 63026 Interment at Jefferson Barracks National Cemetery. A public Memorial service will be scheduled at a later date. In lieu of flowers, memorial contributions may be made in the name of Neal Browne to the charity of your choice.

Send flowers to the Browne family.