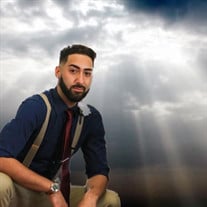 Patrick James Pinnell Beloved son of Piper H. Pinnell and the late James “Pat” Pinnell Loving brother of Paige and Peter Pinnell brother Presten Pinnell (who preceded him in death) and sisters Angel and Airyka Harris Patrick James Pinnell was born on December 21st,1992 first son to the union of Piper and Pat Pinnell. Patrick or “PJ” as he was known to his family and friends was always a caring, kind, loving and happy young man. He had a smile that would brighten the sky on a cloudy day and a laugh that was contagious. PJ was the life of the party and family gatherings with his jokes,rapping and grilling skills.He loved music, family, friends and life. Patrick attended the MRH school district were he played football from his Freshman to Senior year helping the team to the divisional playoff’s and also participated in many other school activities. He graduated from Maplewood Richmond Heights high school in 2011 walking proudly across the stage with that “smile “ you could see for day’s. Patrick loved football, baseball and hockey. He was a Cardinal and Blues fan and liked any football team I cheered for. He showed his spirit about St Louis by getting a tattoo of the Arch,Cardinal bird and Blues hockey logo. Patrick loved being outdoors with family and friends when he wasn’t working. Fishing, Camping, Water Rafting and Barbecuing, but everyday walking his dog’s Diesel and Nylah gave him joy. PJ’s love for cooking put him on the path of working in several restaurant’s in his year’s of employment, and he found his home and extended family at Joey B’s on the Hill. Loved by his co-worker’s and management whom with tear’s and sadness will truly miss him. Patrick’s tragic and untimely passing will leave to mourn his death his mother Piper Pinnell, brother Peter and sister’s Paige, Angel and Airyka, Aunt’s Lori Thompson, Melanie Young, Maureen Levy (Rick Levy), Penne Wooldridge (Carl Wooldridge), Shana-Usher Grasso, Uncle’s Jack Pinnell, Joe Grasso and David Carter. Patrick also has a host of cousins and many many friends whom will dearly miss him but forever love and remember him.

The family of Patrick James Pinnell created this Life Tributes page to make it easy to share your memories.

Send flowers to the Pinnell family.