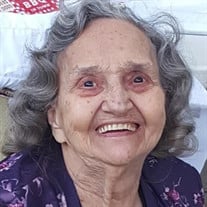 It is with deep sorrow and a heavy heart that we announce the death of Nelle Aileen Ruck (Wanner), which occurred on July 19, 2021 just one day after her 94th birthday. Nelle was born July 18, 1927 to Mary & Milton Wanner. She had 11 brothers and two sisters and the family of 16 lived in Maplewood, Missouri. She grew to be a very talented and artistic woman, and a wonderful seamstress. She molded and painted many ceramics, made clothes, draperies, upholstery, a wedding dress for a family member, and many dance costumes for her daughters. Nelle fell in love with Gordon Charles Ruck (Bo) at a young age and they were married on October 23, 1948. Bo was the love of her life. She always said, “The best years of my life were my married years.” She’s been missing Bo since his passing on December 25, 2000. The two lovebirds spent a lot of time at their country home in Illinois where there were many family gatherings, fishing in the pond or ice skating in the winter, playing in the yard, planting in the garden, picking blackberries, and a whole lot of fun. They later purchased a vacation home in Oakland, Arkansas, where they spent many hours fishing and boating on Bull Shoals Lake and simply enjoying each other’s company. The biggest joy in Nelle’s life was her family, whom she loved more than anything. She was the proud mother of four boys - Bob Ruck (Jayne), Jim Ruck (Barb), Gordon Ruck (deceased), Bill Ruck (Lora); and two girls - Thelma Borowiak (Randy), and Louise Oliensis (Adam). Nelle was especially proud of her 13 grandchildren (Amanda Ruck Benedick; Marianne Ruck Dewitt, Keith Ruck; Jessica Ruck Ullrich; Bill, Kevin & Bradley Ruck; Christina & Zach Borowiak; Rebecca, Marlena, Jacob, & Sophie Oliensis). She would collect toilet paper rolls, bread ties, yarn, caps, glitter, etc., to use in creating wonderful crafts with the kids. There were many hours spent doing crafts and enjoying each other's company when the grandchildren were young, and she was extremely proud of the wonderful people they all became. When the grandchildren married, Nelle counted their spouses as her grandchildren and would tell people she had 20 grandchildren (Al Benedick, Tim Dewitt, Katie Ruck, Jed Ullrich, Elizabeth Ruck, Ellen Ruck, and Anna Ruck. Nelle’s life became even brighter as her family grew with 14 great grandchildren (Albert & Camden Benedick; Timmy, Peyton & Riley Dewitt; Layni, Avery & Adelyn Ruck; Serenity & Raina Ullrich; Marie & Alice Ruck; Leo Ruck; and Noah Ruck). She felt truly blessed to have such a large, loving family. Mom/Grandma was always fun to be with. She rode the bull at Gillies in Texas, went tubing on the lake in her 80’s, partied with her grandchildren, participated in contests on cruises, and enjoyed life to the fullest. She was also a collector of many things. She had a big doll collection, spoon collection, salt & pepper collection, and cup & saucer collection. She was very giving and would share anything, except her ice cream! She was kindhearted, humble, and always looked for ways to help others. She was a sweetheart to everyone she met, which is why so many people called her Mom or Grandma and loved her dearly, even though they weren’t family. Nelle will be deeply missed, but remembered as a loving wife, mother, mother-in-law, grandmother, great grandmother, sister, aunt, and friend. Although our tears are flowing, our memories of this wonderful woman will be our comfort, and our love for her will live forever. Family and friends are invited to visitation on Tuesday July 27, 2021 from 5pm to 8pm at Jay B Smith Funeral Home in Fenton (777 Oakwood at 141). You’re also invited to the funeral service on Wednesday July 28, 2021 at 11am followed by a procession to Memorial Park Cemetery with a reception to follow at Genesis Banquet Center.

It is with deep sorrow and a heavy heart that we announce the death of Nelle Aileen Ruck (Wanner), which occurred on July 19, 2021 just one day after her 94th birthday. Nelle was born July 18, 1927 to Mary & Milton Wanner. She had 11 brothers... View Obituary & Service Information

The family of Nelle A. Ruck created this Life Tributes page to make it easy to share your memories.

It is with deep sorrow and a heavy heart that we announce the...

Send flowers to the Ruck family.