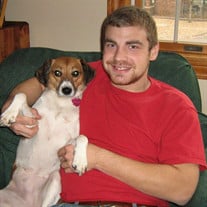 Michael David Oppenheim was born January 17, 1989, in Saint Louis, Missouri, to David and Beth (Voll) Oppenheim. He grew up in Rock Hill, Missouri with his parents and brother, Stephen, graduating from Webster Groves High School in 2007. Michael attended Lutheran School of Nursing, graduating in 2013. Michael loved spending time with family. While growing up, he and his brother spent many weekends at his paternal grandparents’ cabin, near Marthasville, Missouri, learning much about nature and the outdoors. He also loved spending time with his maternal grandparents and large extended family, who often met for family events in Chicago. Family was important to Michael, and he really enjoyed being back with his parents for the last few weeks of his life. Things that few people know about Michael are that, as a little boy, he was unusually strong and would happily help with the yard work or any other manual labor. One of his favorite jobs was doing the demo work before the family remodeled their kitchen. He was about 10 years old at the time, but he handled it like a grown man and loved it. Michael also obtained his ham radio license at the age of 14, and enjoyed amateur radio throughout his life. He always laughed about the fact that he was the only kid, and the only one that wasn’t old and fat, when he attended ham radio events. Michael’s passions in life were camping, cooking, eating foods from all over the world (the stranger and spicier the better), spending time with family, watching movies, and his dog, Daisy. Michael had a struggle with substance abuse that lasted more than a decade, and it ultimately cost him his life. However, Michael was so much more than his addiction. He was a kind, easy-going person with a big heart and a good sense of humor. When he wasn’t dealing with his own issues, he had a desire to help those struggling with addictions and homelessness. He experienced these things in his own life, and he was compassionate to others who had trouble helping themselves. One of the great lessons we can learn from Michael is that when we see a homeless person or a person struggling with addiction, each of them has a story. Nobody starts out with the goal of being addicted or homeless, and we should be compassionate toward those that society often views as second-class citizens. The most important aspect of Michael’s life was that he loved Jesus and had acknowledged Him as his Savior. It is challenging to maintain a relationship with God when you are struggling with addictions, but God always kept Michael close to him. Because of this, Michael will now spend eternity in the presence of God. Michael is survived by his parents, David and Beth Oppenheim, of Saint Louis, Missouri, and his brother Stephen (Mikiala) Oppenheim of Fort Wayne, Indiana. He is also survived by his paternal grandfather, Arthur (the late Carol) Oppenheim, and his maternal grandmother, Carol (the late Clifford) Voll, as well as many loving aunts, uncles, cousins, and friends. Memorial services will be held at 2:00 p.m. on December 28, 2019, at Peace Memorial Village, 10300 Village Circle Dr, Palos Park, IL 60464, and at 10:00 a.m. on January 11, 2020, at Cornerstone Evangelical Free Church, 921 Edgar Rd, Saint Louis, MO 63119. The family would enjoy visiting with friends for the hour prior to each service, as well as after each service concludes. In lieu of flowers, Michael would have appreciated help for the homeless, so the Mike Oppenheim Memorial Fund has been established. The fund will be administered by the Missions Team of Cornerstone Church to assist the homeless. Please make checks payable to Cornerstone Church, 921 Edgar Rd, Saint Louis, MO 63119, and note Mike Oppenheim Fund on your check. Also, donations may be made through a GoFundMe Charity account. You can search for Mike Oppenheim on the GoFundMe site, or go to https://www.gofundme.com/mike-oppenheim-memorial-fund?pc=em_dn_contacts_r&rcid=r01-157654851002-9d1b802ab80149a0&member=3373736

The family of Michael David Oppenheim created this Life Tributes page to make it easy to share your memories.

Send flowers to the Oppenheim family.