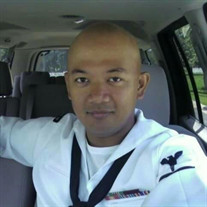 Llermo V. Rogers, 50, of St. Louis, MO, died at 2:55 a.m. on Friday, January 28, 2022, at DePaul Hospital. Llermo was born on July 27, 1971 in Manila, Philippines. Llermo was a shining star to everyone who knew him. He made friends wherever he went, always with an infectious smile on his face. He was honest, true, loyal, dedicated, loving and heartwarming. He was a lifelong student and teacher of martial arts. He had a black belt in Budo Taijutsu, and was the Sōke of Yamamoto-ryū, going on to found the Fudoshin Ninpo Dojo. He also had a black belt in Tae Kwon Do, practiced Chen-style Taijiquan and taught the Family Style of Filipino Martial Arts. He served in the United States Navy as a Corpsman from September 27, 1999 to July 29, 2011, and was awarded three Navy Achievement Medals. Determined to pursue his passion for film, and share his creativity with the world, Llermo earned a Bachelor of Arts degree in Theater Arts and a certificate in Media Production from the University of Missouri–St. Louis in 2019. He was preceded in death by his tatang, Juanito “Johnny” D. Vendiola; his nanang, Elizabeth Saquing Vendiola Fabro; his mother, Emilia Vendiola Rogers; and his brother, Andre Jacob Rogers. Llermo is survived by his partner, Lisa Marie Milone; his daughters, Colleen Morgan Rogers and Brenna Raine Rogers; his father, Dennis Kevin Rogers; his siblings, Juel Vendiola Rogers, Alda (Chris) Vendiola Rogers Hughes, Alexis (Amber) Rogers, and Ricki (Rachel) Otwell; his nieces and nephews, Eanna, Tiphany, Alexus, Marissa, Leilani, Ian, Olivia, Owen and Bernadette. Cremation was provided by Jay B. Smith Funeral Homes. A funeral will be held at 12:30 p.m. on Monday, February 7 at Jefferson Barracks National Cemetery.

The family of Llermo V. Rogers created this Life Tributes page to make it easy to share your memories.

Send flowers to the Rogers family.