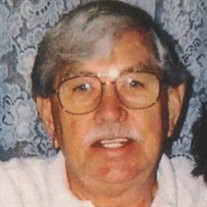 John Vernon “Sonny” Prunty, 87 of Lemay, Missouri died on Sunday, August 16, 2020, at Mercy South/St. Anthony's Medical Center in Saint Louis, Missouri. Born Tuesday, February 14, 1933 in Saint Louis, Missouri, to the late James Prunty and the late Martha Brown (nee Romanot); Dear brother of the late Buddy and the late Alma; Beloved husband and companion of Rebecca Prunty (nee Hanger) for 42 years; Loving father of the late Sandy, the late Debbie, the late Sean, and Richard; Loving step-father of Carroll and Harold; Cherished grandfather, great grandfather, dear father-in-law and step-father-in-law, brother-in-law, uncle, cousin and friend to many; Sonny was a proud Marine who served during the Korean War. He worked in the communications industry installing two-way radios for Motorola for many years. He loved biographies, war documentaries, history, chocolate, Imo’s pizza, opera music, Luciano Pavarotti, The Three Tenors, Andrea Bocelli, and Rod Stewart. His greatest love though, was the love he felt for his family. Sonny was so incredibly proud of his children, step-children, grandchildren, and great-grandchildren. He thought of them often and always kept them in his heart no matter where he was. Sonny had so much love in his heart. His smile and his laugh could turn any bad day into a good one. His sense of humor and his laugh will remain in the hearts of many forever. He truly made this world a brighter and better place. Thank you, Sonny! The loss is immeasurable, but so is the love he left behind. Gone from this Earth but never forgotten. The family would like to thank the caring staff of Woodland Manor and Mercy South / St Anthony’s Hospital for their exceptional care, as well as the compassionate staff at Jay B Smith Funeral Home. Memorial Services will be held at a later date with interment and Full Military Honors at Jefferson Barracks Cemetery. Online condolences may be made to the family at www.jaybsmith.com

The family of John Vernon "Sonny" Prunty created this Life Tributes page to make it easy to share your memories.

Send flowers to the Prunty family.