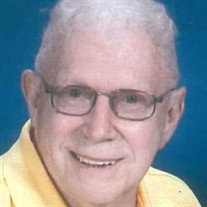 John “Gene” Eugene Dawson, 89, died at the Alexian Brothers Sherbrooke Village in St. Louis on September 21, 2020 Gene was born February 18, 1931, in the Armah, Iowa, area, the son of John P. and Mary Agnew Dawson. He was the first grandchild on both sides of his family, so he always said he felt blessed that he was around when all his brothers and first cousins were born. Gene lived in rural Keswick, rural North English, and rural Parnell while growing up. Following Gene’s graduation from North English High School in 1949, he first worked on the family farm and did custom baling. He then served as a Marine but received a Medical Honorable Discharge due to a teenage bout with polio. After graduating from the Paris Academy of Beauty Culture in Cedar Rapids in 1960, Gene worked as a beautician in Cedar Rapids, Iowa. Then Gene moved to St. Louis where he worked as a tax preparer, in factories, and as a waiter. His late brother Leroy was his closest friend and his boss when Gene worked at the Foot Long Hot Dog Company in the 1960s and during his H&R Block career from 1970 to 1994. Gene’s health had deteriorated over the last few years, but he pushed through and got the story of his life out to much acclaim. In early 2019, he was interviewed as part of an upcoming documentary, Gay Home Movie, which details LGBT life in St. Louis in the 1950s. As a result of that, in June 2019, he was interviewed for the story, “L.G.B.T.Q. in the Midwest, Where the Fight Is Still Happening,” in The New York Times. After this publicity, he was inspired to complete his memoir that he had started in 2003. Farm Boy, City Girl: From Gene to Miss Gina was published on Amazon in April 2020 and has received outstanding reviews. Readers write of their enjoyment of his very honest and heartfelt memoir, as Gene didn’t always comply with the “norms” of the day as he tried to live a life true to himself. Gene was a life-long Catholic and a member of St. Anthony of Padua Catholic Church in St. Louis. He took great care of his pigeons and his beloved dogs, Bo and Bo Peep, and loved all animals. Gene enjoyed genealogy, cooking, and growing flowers and vegetables. On Saturdays in the fall, he liked to watch college football, and he was a fan of the Los Angeles Dodgers since he was a teenager. Gene was proud to live in his south St. Louis home with his pets until the age of 87 when he moved to Sherbrooke Village due to ill health. Gene loved to keep in touch with his friends and relatives by phone and in person—he was the “matriarch” of the family. He is survived by his brothers: Bernard of Bussey, Iowa; Patrick (Geneva) of Moscow Mills, Missouri; and Thomas of Torrance, California; sister-in-law Marlene of Williamsburg, Iowa; numerous nephews, nieces, great-nephews, great-nieces, and great-great nephews; many Dawson and Agnew cousins; and his special friends Lana James, Twila Gerard, and Shelly Gerard of Millersburg, Iowa; Leroy Atkins of St. Louis; Geoff Story of St. Louis; Jill Payton of St. Louis; and James and Jan Willard of Irondale, Missouri. He was preceded in death by his parents and brothers Leroy and Ken. The family extends its gratitude to Dr. Timothy Mahood and his staff, and the nurses, staff, and therapists at Sherbrooke Village for their outstanding care and compassion for Gene, especially when the family could not see him due to COVID-19 restrictions. He was cared for with great kindness by everyone there. The Solace Hospice Care staff also was wonderful to Gene. A visitation will be held at 10:00 a.m. on Wednesday, September 23, at the Jay B. Smith Funeral Home, 7456 Manchester Ave. in Maplewood, and the funeral service will follow at Noon – also at Jay B. Smith Funeral Home. A visitation will be held at the Powell Funeral Home in North English at 10 a.m. on Friday, September 25, and prayer service at Noon before burial at the Armah Cemetery in rural North English. Memorials may be directed to the Armah Cemetery Association, c/o White State Bank, 209 Main Street, P.O. Box 68, South English IA 52335. Messages and tributes may be left at jaybsmith.com or powellfuneralhomes.com.

The family of John "GENE" Dawson created this Life Tributes page to make it easy to share your memories.

Send flowers to the Dawson family.