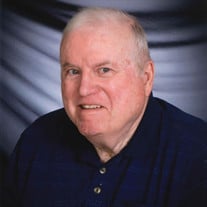 Jerry Dean Knapp Beloved Husband of Betty Knapp (nee Cross) Loving Father of Nancy Marie Knapp of Overland, MO Kevin (Melanie) Knapp of Nashville, TN Carl (Melissa) Knapp of Macon, MO Cherished Grandfather of Connor, Cameron, Mary Elizabeth, Evan and Michael Dear Brother of Barbara (Larry) Dodge Jerry was born and grew up in Waterloo, Iowa. He entered the Army in July of 1964. He served in Vietnam. After leaving the Army he attended Air Line School in Kansas City following his boyhood interest in airplanes. After completing airline school he began his career with Ozark Airlines which brought him to St. Louis and to an apartment on Main Street in St. Charles, MO. He attended St. Charles First United Methodist Church. There he met Betty while attending a college and career Sunday School class. Betty invited the class to attend a district event. Jerry was the only one who attended with her. To this day he thinks it was a set up which Betty denies. However, it was good for in 2020 they celebrated 52 years of marriage. Jerry was a loving father to 3 children and 5 grandchildren. He loved to travel. He built his workshop in the basement and created many projects. He sang in the church choir. He was a Boy Scout leader and enjoyed cooking on the camp outs. He also cooked for Wednesday Night Live program for children and youth. He enjoyed helping with youth projects and trips. He enjoyed playing Bridge and other games. In 1973 the family moved to their long time home on Larkspur Court. That same year they bought a used above ground pool. When the railing rusted it was replaced with an in-ground pool. This made the family life-long swimmers. He swam and played with the kids in the pool. Even once jumping off the roof into the pool (never let the kids do it.) He also spent many years at the gym exercising. Jerry retired from American Airlines in 2001. After retirement he began volunteering at the food pantry Fish. In 2008 he suffered a stroke which caused him to develop Parkinson's in 2011. He had two back surgeries which led him and Betty to move to Breeze Park, a Lutheran Senior Living Facility. Jerry will be remembered as a kind and loving man. He will be deeply missed by all. Member of St. Charles United Methodist Church Memorials to: First St. Charles United Methodist Church Choir 801 First Capital St. Charles, MO 63304 or Parkinson's Foundation 200 SE 1st Street Suite 800 Miami , FL 33121

The family of Jerry Dean Knapp created this Life Tributes page to make it easy to share your memories.

Send flowers to the Knapp family.