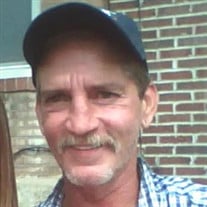 Jeffrey L. Campbell (1961 to 2021) of Maplewood, MO died on Wednesday, February 17, 2021. Jeff was a carpenter by trade and a member of the St. Louis - Kansas City Carpenters Regional Council (Local 1596). He would encourage creativity and precision when using his craft to approach every household project. When he wasn’t adding splinters to his hands; he would build up his callouses bowling at Saratoga Lanes in Maplewood, golfing both on the course or in the house, or clapping while attending St. Louis Cardinals baseball games. Despite his tough hands he had a helpful heart. He would never hesitate to offer a helpful hand like offering to carry groceries or giving a hug to family and friends. Jeff is reunited with his mother (Rose Mary Campbell, 2019) and other family and friends who predated him in death. Jeff’s memory is honored by many. He had two children, Phillip and Lauren Campbell, with Debbie Campbell. He is survived by his father, Lester “Dale” Campbell, and six Campbell brothers, Mike, Steve, Scott, Neal, Stu, and Keith, as well as their spouses, partners and children. He was a husband, father, uncle, nephew, cousin, neighbor, and friend to many. In light of the COVID-19 pandemic, anyone interested in celebrating the life of Jeffrey L. Campbell can send condolences to Jay B. Smith Funeral Home at 7456 Manchester, St. Louis, MO 63143 in lieu of attending a public visitation or service. The immediate family will gather to celebrate his life in a private service. Jeff will be laid to rest at Sunset Memorial Park and Mausoleum (10180 Gravois Rd, Affton, MO 63123).

Jeffrey L. Campbell (1961 to 2021) of Maplewood, MO died on Wednesday, February 17, 2021. Jeff was a carpenter by trade and a member of the St. Louis - Kansas City Carpenters Regional Council (Local 1596). He would encourage creativity and precision... View Obituary & Service Information

The family of Jeffrey L Campbell created this Life Tributes page to make it easy to share your memories.

Send flowers to the Campbell family.