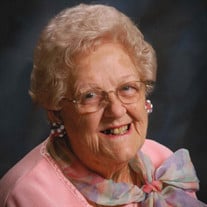 Jane Laverne Fisher Guffey 6/14/1925 to 4/15/2020 Guffey, Jane Laverne At age 94, Jane is now in God’s hands and reunited with her beloved husband, John Robert Guffey and her beloved daughter Janet. She was born in St. Louis on Flag Day in 1925, dear daughter of the late Andrew and Florence Fisher. Loving mother of the late Janet (the late Donald) Stanze, James (Maureen) Guffey, John Guffey, Joseph (Maria) Guffey, Jean (Kenneth) Wash, Judy (Christopher) King; cherished grandmother of Tammy Admire, Jennifer Price, John Stanze, Donald Stanze, Elizabeth Echele, Scott Guffey, Jessica Calkins, Ryan Guffey, Daniel Guffey, Patrick Guffey, Sarah Rahl, Erin Delawalla, Carolyn Collins, Justin Wash, Andrew Wash, Nathan Wash, and Lauren Wash, Kelly King, and Ryan King; great-grandmother of 27 and great-great-grandmother of 11 children. Jane was born and raised in St. Louis where she worked as a telephone operator for Southwestern Bell before meeting her husband John, whom she married in 1944. They were married for 54 years. Jane was a devoted wife and mother, raising six wonderful children. Jane was active in her parish, St. James the Greater, where she volunteered at the school, led scout troops, and helped with the annual parish picnic, where she was known as the "cake lady" for her many years working in the cake booth. Jane had an unshakable faith and could be found every Sunday for 70 years in "her pew" at the front of St. James Church. Jane was known to have a “direct line” to God and was often called on to pray for people. She would add them to her daily list of prayer intentions. Jane was also a member of the Franz Park Neighborhood Association and took an active role in the Baseball Bat Brigade to rid the park of vandals and successfully pushed for lights to be installed in the park for safety. Returning to the workforce in the 70s, Jane made life-long friends at Deaconess Hospital where she worked in the cafeteria and then as a pharmacy tech. Jane was the biggest fan and loudest cheerleader for the Relatively Good family softball team. Jane enjoyed spending time with her grandkids and was very proud of them, displaying their pictures and artwork. Jane will be remembered by many as a true and devoted friend, who was always just a phone call away. A memorial celebration will be held at some future date. In lieu of flowers, if desired, please send a donation in Jane’s name to your favorite charity or to St. James the Greater Catholic Church, 6401 Wade Ave., St. Louis, MO 63139. Their legal title is: Archdiocese of St. Louis for the use of St. James the Greater Parish.

Jane Laverne Fisher Guffey 6/14/1925 to 4/15/2020 Guffey, Jane Laverne At age 94, Jane is now in God&#8217;s hands and reunited with her beloved husband, John Robert Guffey and her beloved daughter Janet. She was born in St. Louis on Flag... View Obituary & Service Information

The family of Jane L. Guffey created this Life Tributes page to make it easy to share your memories.

Send flowers to the Guffey family.