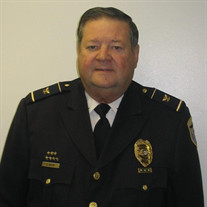 Fortified with the sacraments of Holy Mother Church James Patrick White Beloved Husband of Lucille C. White (nee Nisbet) Dear Son of the late Peter W. and Dorothy P. White Loving Father of Jennifer Guinn (Anthony), Elizabeth White, Laura Miller (Joseph), Colonel Peter White, USAF (Heidi), and Andrew White (Christine) Cherished Grandfather of Michael (Kelsey), Megan (John), Jacob, Gabrielle, Addison, Evan, Henry, Louis, Landon, and William Adored Great-Grandfather of Aiden and Zoey Dear Brother of John (Margret), Joseph (Nancy), Judy (Marvin, deceased), and Jane (Lawrence) Cherished Uncle, Great-Uncle, Cousin and Friend to many Memorials can be made to : St. Vincent DePaul Society Food Pantry c/o Immaculate Conception Parish, Maplewood, MO or The BackStoppers Inc. Jim spent 52 years as a public servant, serving his country, state, county and city in various roles. A lifelong resident of the City of Maplewood, he joined the United States Air Force in 1963 and was trained as an Air Policeman while attending college part-time. He received many honors, but he was most proud of being selected as Pacific Air Forces First-Term Airman of the Year in 1965. He was honorably discharged as a Staff Sergeant in 1967. Later that year, Jim and Lucy married and moved to Warrensburg, MO where he worked part-time as a Police Officer for the City of Warrensburg. There, he also finished his education and graduated from Central Missouri State University with a dual major in Political Science and Police Administration in 1969. Jim and Lucy returned to Maplewood where Jim started his career as a Patrol Officer with the St. Louis County Police Department. In less than a year, he was selected to be part of the Planning & Research Unit. He secured a grant to acquire the first police helicopters to create the Police Department’s Bureau of Aviation. In 1973, he was promoted to Assistant Director, Bureau of Planning & Research. During this time, he also completed his Master’s Degree in Urban Planning at St. Louis University. In 1976, Jim was promoted to the position of Director, Office of Emergency Management. During his tenure, he was the Project Director and led the implementation of the 911 Emergency Phone System in St. Louis County. In addition, he was the Project Director of a $20 million police bond issue that was used to build the largest single county outdoor siren warning system in the nation at that time. Jim also received citations from the Governor’s Office and County Executive’s Office for exceptional response and emergency operations during the massive snowstorm of 1982, as well as the great flood in the spring of 1982. He also established a system of mutual aid for all major emergencies in St. Louis County across all municipalities. In 1987, Jim became the Executive Director of the Division of Administration for the St. Louis County Police and, in 1991, was appointed as the acting Chief of Police for St. Louis County. After holding various other roles, he eventually retired from the St. Louis County Police Department in 1999. In June of 1999, Jim became the Chief of Police for the City of Maplewood where he served for almost 10 years before retiring in 2008. He dedicated his tenure as the Chief to ensuring that his officers always had the most up-to-date technology and state-of-the-art equipment available, so they could better safeguard themselves as well as the community they served. Afterwards, Jim served as the Mayor of the City of Maplewood for two terms from 2009 through 2017. Throughout his career, he was known as a servant leader, acting with the utmost integrity and compassion while always putting others before himself. Jim was a lifelong member of Immaculate Conception Parish in Maplewood, where he and his wife volunteered and led many fundraisers and social activities. He loved sports, being outdoors and was an avid hunter and fisherman. In a lifetime of serving others, Jim strived to make an impact in the lives of everyone around him—at home and in the community. He would do anything for his friends and loved spending time with them. But nothing was more important to him than his family, whom he loved fervently and deeply.

The family of James P. White created this Life Tributes page to make it easy to share your memories.

Fortified with the sacraments of Holy Mother Church
James Patrick...

Send flowers to the White family.