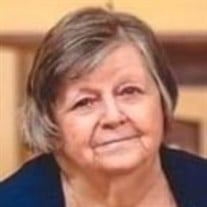 The family of Helen Mary Schall (nee Ried) created this Life Tributes page to make it easy to share your memories.

Beloved Wife of the late Edward...