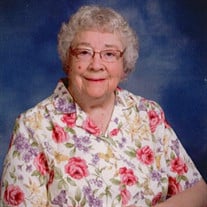 Florentine Elizabeth Jaegers was born on July 8, 1927 to John and Conradine (Porting) Jaegers in Meta, Missouri. She had two sisters, Theodora and Clara and three brothers, Clarence, Ray and Walter (all previously deceased). Although Florentine loved her family and worked hard on the far, she knew early on that country life wasn't for her! Florentine left the family farm after eighth grade and moved to the "big city" of St. Louis to find work so she could help the family financially. She embarked on a new chapter of her life, new jobs, new friends and a new city to experience. In 1947, she fell in love and married George Sosenko. Within a period of three and a half years, they had three daughters, Sandra, Sharon and Linda. Florentine loved being a wife and mother, and when George passed away in 1958, she faced the loss with her usual strength and courage, making sure her young daughters were loved and cared for. She was fortunate in love once again when she met and remarried Don Rosa in 1961 and welcomed his two children, Mike and Vickie (deceased). Don and Florentine moved to Spanish Lake and Don adopted the girls in 1963. They were active in the new parish, Our Lady of Loretto, and they built their lives around church, family and friends. They were truly soul mates and showed all who knew them how to love and live life to its fullest. Don passed away suddenly in December 2000 and although Florentine was heartbroken, she again gathered her strength and made a new life for herself in O'Fallon, Missouri. She joined the Senior Center where she won the pinochle tournament on her first day. When she moved to Assisted Living, she formed a group to pray the rosary and filled in when they needed a caller for Bingo. Florentine embraced her sons-in-law Bob (deceased), Dale and Chuck as her own. She was proud of her grandchildren and welcomed each new great grandchild. She was a second mother to Fred and Carol (Kohler). She held each of her nieces and nephews close to her heart, which always had 'room for one more'. As her family grew, so did her capacity to love. She was also a true friend to many, including her oldest friend Lorraine, as well as her breakfast group that met every Thursday for nearly 50 years. We were comforted in her final days by seeing so many staff and residents stop by her room just to say hello, especially Venita. Everyone who knew her was touched by her. Florentine passed in the early hours of June 27, 2021. Rest In Peace.

Florentine Elizabeth Jaegers was born on July 8, 1927 to John and Conradine (Porting) Jaegers in Meta, Missouri. She had two sisters, Theodora and Clara and three brothers, Clarence, Ray and Walter (all previously deceased). Although Florentine... View Obituary & Service Information

The family of Florentine E. Rosa (nee Jaegers) created this Life Tributes page to make it easy to share your memories.

Florentine Elizabeth Jaegers was born on July 8, 1927 to John...