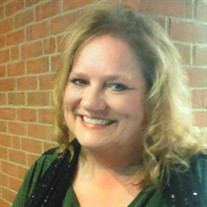 Cindy Lynn Norman Dear daughter of Sharon and Delmar Norman Loving mother of Brittany (Gerald) DeClue and Alexander Swyers Cherished grandmother of Chloe DeClue, Elijah DeClue and Khari DeClue Dear sister of Delmar "Rusty" Norman and Debbie (Bennett) Howe Cindy was a mother-in-law, sister-in-law, aunt, niece, cousin and friend to all. She will be deeply missed by many. Cindy Lynn Norman was the third child born to Sharon and Delmar Norman on November 17, 1969. As a younger sister to Rusty Norman and Debbie (Bennett) Howe, Cindy's personality began to bud at a young age. Extremely cute, funny, sassy, and charming, Cindy could grab the hearts of those around her and make them smile, a trait that would follow her the rest of life. Cindy has always been a trooper, getting it done no matter what! She even completed her high school education receiving her diploma from Maplewood-Richmond Heights High School in spring of 1988 with her first born daughter, Brittany DeClue in the crowd. After high school Cindy worked at Michael's Bar and Grill employed by Michael Malliotakis, who treated her and Brittany as if they were family. After Michael's, Cindy chose to further her education at Stanford Brown College receiving her Associate if Business Accounting. With her degree in hand Cindy ambitiously obtained a position at Washington University School of Medicine in the department of Pediatrics doing research. Cindy worked her way up the ladder ending up a supervisor in the Department of Social Work on the Danforth campus dedicating and devoting 26 years of her life to Washington University. Along Cindy's time at Wash U she met Charles Swyers. This relationship blossomed into a marriage that produced Cindy's second born, Alexander Charles Swyers. With two beautiful children under her arms and a bright future in front of her, Cindy set out on her journey through life with vigor! She attacked everyday with her carefree attitude of love and laughter. As Cindy matured she gained many more great attributes like awesome Mom to Brittany and Alex, Loving Sister to Rusty, Debbie and Bennett, Funny Aunt to Amanda, Kevin, and Chris(Howe), PROUD grandmother of Chloe, Elijah, and Khari DeClue, Chosen Sister to Jackie, Shelly, Colleen, Tina who she never missed a St. Patty's Day with EVER, and great cousin and niece to so many more. Cindy gained tremendously from her mother Sharon Norman. Sharon was a strong woman who instilled strength into Cindy along with other traits of her warmth, her love, and her courage as well. Cindy also had an affinity for her "Fur Babies" as she would call them. Never going a day without at least one in her life, Cindy loved her pups as they were her children as well. Cindy was a TRUE Maplewood girl at heart with a personality that could light any night's sky, a smile so mesmerizing you could lose yourself in it, a heart so big you could use it as a pillow, a hug that takes you back to a time where you were too young to know anything about but love... That was Cindy!! Always proud and happy for her friends and family on all their endeavors. Always open to talk and listen and give you her thoughts and opinions, whether you liked them or not! There was nothing in the world that could stop little "Cindy Lou" from expressing her love. Cindy was the absolute best Mother, Sister, Daughter, Grandmother, Niece, Cousin, Friend, Friend and Friend again to SO many. She will be missed and loved until the end of time by all who crossed her path!

The family of Cindy Lynn Norman created this Life Tributes page to make it easy to share your memories.

Send flowers to the Norman family.