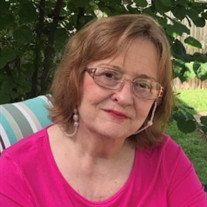 Christine Mary Mazzola (Fehlig), 79, died unexpectedly on April 4, 2022. In her final days she was surrounded with love and her family. Christine was born March 24, 1943, in St. Louis to Anthony and Virginia Mazzola. Her father was a musician, and her mother was a homemaker who helped raise Christine, along with her brother and three sisters. She graduated from Southwest High School where she excelled in tennis and graduated early. She went on to receive her bachelor's from Southeast Missouri State University and held two master's degrees from Webster University and University of Missouri St. Louis. Christine began her career in education at Vandover Elementary in Fenton and later transferred to Bowles Elementary, where she taught kindergarten for many years. Her humor and zeal for life was insatiable, and her home overflowed with love and laughter. Christine enjoyed life-long caring friendships with friends from elementary and high school. Her hobbies and interests included traveling, genealogy, history, St. Louis culture (music and theater), and playing canasta. Christine had a generous heart, caring for others and bringing laughter to all she met. Animals, especially dogs, brought a smile to her face. They were overjoyed when she arrived with a bag full of treats. She loved celebrating holidays with family and was always ready with a fun game to play or gift to give. Christine is survived by her daughter, Michelle (Ted) Graham; granddaughter, Megan (Adi Suresh) Crenshaw; sister, Rita (Robert) Champlin; brother, Salvatore (Cindy) Mazzola; and sister Antoinette (Joseph) Gibbons; and many nieces and nephews. She was preceded in death by her first husband, Charles Fehlig; and sister and brother-in-law, Rosemary and Michael Curry. A celebration of life for Christine will be held Sunday April 10, 2022, at the Stupp Center in Tower Grove Park from 12:00-3:30 pm. In lieu of flowers, donations may be sent to Ehlers-Danlos Society (Ehlers Danlos Society) or Humane Society of Missouri (Humane Society of Missouri)

Christine Mary Mazzola (Fehlig), 79, died unexpectedly on April 4, 2022. In her final days she was surrounded with love and her family. Christine was born March 24, 1943, in St. Louis to Anthony and Virginia Mazzola. Her father was a musician,... View Obituary & Service Information

The family of Christine Mary Mazzola created this Life Tributes page to make it easy to share your memories.

Send flowers to the Mazzola family.