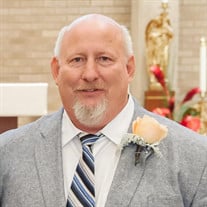 Bruce Alan Granger, 60, died on Thursday, March 26, 2020, at his Cedar Hill, MO home from natural causes. Bruce was born October 30, 1959, in St. Louis, MO and has lived in Maplewood, Kansas City, Dittmer, and most recently, Cedar Hill. He attended Maplewood Richmond Heights High School, class of 1978. He was baptized at the Church of the Nazarene – Maplewood. He is survived by his mother, Esther Patricia Granger; brother, Thomas Granger; sister, Diane Eklund; sons, Dallas Gibbs, Cody Gibbs, Joshua Gibbs, and Dusty Granger; daughter, Brandy Mashburn; step-daughter, Farrah Edmondson; son-in-law, Mike Mashburn; daughter-in-law, Yvette Granger; and grandchildren. He is preceded in death by his father, James Granger; brother, Timothy Granger; and wife, Sylvia Granger. He will be remembered as a loving and hard-working family man, who always put other’s needs before his own, and whose kindness knew no bounds. His love extended beyond humans to his large animal family that he adored as well. He enjoyed working on cars (especially classics and muscle cars), homes, or fixing anything that was broken for that matter. He enjoyed many types of music and was often found playing drums on his belly and singing off pitch. He enjoyed movies, and his favorites were action movies. More than anything, he just enjoyed being around the people he loved. The people who love him will forever miss just having him around. A memorial service will be held at a later date, once we can all safely gather with family and friends. If you wish to share photos or memories, please reach out to Dusty Granger at [email protected]

The family of Bruce A. Granger created this Life Tributes page to make it easy to share your memories.

Send flowers to the Granger family.