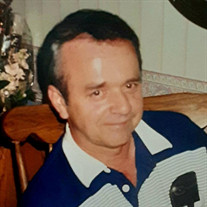 Bill Wood, born September 17, 1943, a lifelong resident of St. Louis, MO, passed peacefully in his sleep at home, surrounded by his family, on September 19, 2020. Son to Golden and Elmer Wood, Bill is survived by his wife of 56 years, Karen (Cotner) Wood, 3 daughters - Sherri (Paul) Bitter, Diane (Dan) Ritter, Amy Wood, 4 grandchildren Samantha, Louis, Sam, and Blake, and sister Marie Randolph. Husband, father, grandfather, brother-in-law, uncle, cousin, father figure and friend to many. Bill worked as a marble installer with his father and uncles, and continued this trade for 55 years. He helped install marble on many St. Louis churches and landmarks including Crestwood Mall, Galleria Mall, New Cathedral, and countless famous St Louisians homes including Ozzie Smith. Bill and Karen also owned and operated a canoe rental in Steelville, MO. offering float trips on the Meramec, Courtois, and Huzzah rivers for 8 years. He had a deep love for his family and friends, and a great sense of humor. He enjoyed hunting, fishing, spending time at his cabin in the woods or any place in nature, bowling, and was an excellent billiards player. He had a pool table in his basement and loved to challenge anyone who was willing to try and beat him (very few ever did). Bill had a deep love and passion for not only his family and friends but also for those less fortunate that he. After his retirement in 2004 he made it his mission to serve the homeless in St. Louis' Tent City along with his family. He visited almost daily for many months bringing them food, water, propane tanks for heat and all other essential items. He brought them to our church to attend services when they requested to come and raised money for their needs until he was too ill to do so. Bill was an active member, supporter and served for Maplewood Baptist Church for many years and loved his church family dearly. He felt called to travel on a mission trip to Turkey. Although he loved to travel in the United States with his wife and kids, at that time traveling to Turkey was rather unsafe but he felt led to go and he was grateful for answering the call. In lieu of flowers, contributions can be made to Mid-Cities Church. Flowers, Donations, and Condolences may be offered at JB Smith Maplewood.

Bill Wood, born September 17, 1943, a lifelong resident of St. Louis, MO, passed peacefully in his sleep at home, surrounded by his family, on September 19, 2020. Son to Golden and Elmer Wood, Bill is survived by his wife of 56 years, Karen... View Obituary & Service Information

The family of Billy E. Wood created this Life Tributes page to make it easy to share your memories.

Send flowers to the Wood family.