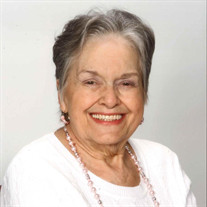 Jeanne was given life by her Creator and was born on April 25, 1930, the child of Harry Ogden and Mary Lorraine Eatherton. On April 29, 1950 Jeanne received the gift of her beloved companion and husband, Eugene Eimer. Gene and Jeanne celebrated 49 years of marriage together before he proceded her in death on May 4, 1999. The Lord blessed them with six daughters, 16 grandchildren, and 12 great grandchildren. God blessed Jeanne’s life with many special people as she served God in her vocations at home, church, and work in the community. As a wife and mother, she was all about making her house a home. She was a fabulous and creative cook. All holidays were celebrated and made special with her decorating, baking, elaborate meal planning and keeping of traditions. Jeanne enjoyed listening, dancing, and singing to music from the Big Band Era to the Disco craze and beyond. Music was always playing in the house. She shared her love of music with her daughters and encouraged all of them to pursue piano, dance, and voice lessons. Jeanne also enjoyed sewing — making clothing for herself and her daughters, clothing for Barbie Dolls, and unique Halloween costumes. Other hobbies included reading, drawing, puzzles, and arts and crafts. Her laughter was infectious and would often be heard while watching her favorite re-runs of I Love Lucy, MASH, and Golden Girls. Family was everything to Jeanne and the true definition of what was important to her. Her home was always open to everyone. You did not need to call and ask to come over—you just showed up. She welcomed her mother-in-law, her mother, and stepfather in their elderly years to live in her home and she took care of them until the end of their time here on earth. Jeanne took great joy in spending time with her grandchildren; whether it be visits by the older ones or babysitting the younger ones. As an only child herself, she truly valued her in-laws and was known as “the personality of the family”. She recognized the importance of spending time together as a family—whether that was time at home or planning outings at Kennywood Amusement Park and apple picking in Pittsburg or Lake Holiday, Grant’s Farm, the Admiral, and the Muny Opera in St. Louis. Meticulously planned vacations included touring the East Coast of the United States, Disney World, and the Lake of the Ozarks. Jeanne was baptized and became a member of the Catholic church shortly before her marriage in 1950. Her faith was important to her, and, throughout life, she always turned to the Lord for strength and comfort. She instilled that same faith in each of her daughters. Gene and Jeanne were long-time members of St. Gabriel the Archangel Catholic Church. She was member of the Knights of Columbus/Ladies Auxiliary. Jeanne was active in the community as a member of the American Legion, Post 111, Ladies Auxiliary and a leader in the Girl Scouts. She was very social and spent time with her friends playing Mahjongg, bowling, and Bridge. In 1993, Jeanne retired after 30 years from AT&T as a telephone operator/supervisor. Her daughters knew they were loved each and every day of their lives. She will be remembered for her truly joyful heart and beautiful smile. Billie Jean “Jeanne” Eimer (nee Ogden) of St. Louis, MO, asleep in Jesus on October 29, 2020 at age 90. Beloved wife of the late Eugene E. Eimer, and loving mother of Linda (Leo) Makarewicz, Carol (Rich Manion) Eimer, Kathleen (Emmitt) Napier, Antoinette (John) Goldak, Sheryl (Vince) Passanisi, and Laurie (Neal) Christopher; dear grandmother of Heather (Rodney), Bradley (Betsy), Brian (Lauren), Craig (Stephanie), Cara (Kent), Nicole (Dave), Jason (Katie), Adam, Natalie (Lori), John, Michael, Emanuele (Melissa), Eugene, Alaina, Nathan (Rachel), and Kyle; dear great grandmother of 12, sister-in-law, aunt, great aunt and friend. All are welcome to attend the visitation and funeral Mass. Interment at Jefferson Barracks will be for the immediate family only. Memorial donations may be made to St. Gabriel the Archangel Catholic Church or the Juvenile Diabetes Research Foundation.

Jeanne was given life by her Creator and was born on April 25, 1930, the child of Harry Ogden and Mary Lorraine Eatherton. On April 29, 1950 Jeanne received the gift of her beloved companion and husband, Eugene Eimer. Gene and Jeanne celebrated... View Obituary & Service Information

The family of Billie Jean "Jeanne" Eimer created this Life Tributes page to make it easy to share your memories.

Jeanne was given life by her Creator and was born on April 25,...

Send flowers to the Eimer family.