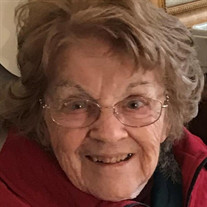 Betty Ruth Godwin Yohe Brown In a blizzard so fierce the doctor had to be carried by her father on horseback, Betty Ruth Godwin was born in Guthrie County, Iowa, on February 18,1926. Ninety-five years later, it was a sunny Spring day with flowers... View Obituary & Service Information

The family of Betty Ruth Brown created this Life Tributes page to make it easy to share your memories.

In a blizzard so fierce the doctor...

Send flowers to the Brown family.