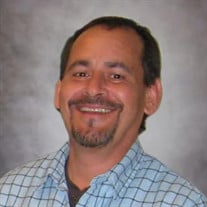 Andrew William Burns July 27, 1962 - October 31, 2021 Andy Burns was born July 27, 1962, in Kirkwood Missouri, the youngest of five and the only one not born in Indiana. His childhood was the perfect mixture of suntanned skin, outdoor fun, and riotous laughter with close friends. Hot Wheels and baseball cards were his prized possessions. He cooked up his own games, complete with rules and scoring. He entertained himself (and sometimes us) for hours by playing with baseball cards and dice on a kitchen table or his wooden desk. Mind you, this included his own, colorful soundtrack: realistic crowd noises, cracks of the bat, and play-by-play worthy of Jack Buck. When he chose to, he could entertain us all with this. The family moved to Cahokia, Illinois in 1974. In short order, Andy discovered a passion that would endure through all of his remaining years – that of fishing with a good buddy. A day of Dad’s coaching was all it took. A second day found Andy beaming as he displayed his catch. Andy took to new things easily and with enthusiasm. During high school, a couple of those things were weightlifting and bodybuilding. He threw himself into them with determined commitment and, on graduating from Cahokia High School in June of 1980, he was a new Andy – 40 pounds heavier and flexing as effortlessly as his hero, Arnold. After school, he moved to St. Louis County. There he would remain, with the exception of one year spent in Detroit (1999-2000). He was described by colleagues as a hard worker in several settings: a locally-owned weight-training gym, a manufacturer of water reclamation systems for industry, a company that provided filtration systems for manufacturing settings, a research and development division of an innovative pipeline repair installations, and in a laboratory doing non-destructive testing on precisely calibrated instruments and equipment. He had a reputation for being meticulous, authentic, intense, generous, and able to see entire complicated systems in his mind’s eye. Andy was preceded in death by his father, Richard Carlton Burns, in 2007. He is survived by his mother, Mary Anne (Stewart) Burns, four siblings – Douglas Burns, Linda (Burns) Dyer, Wesley Burns, and Elizabeth (Burns) Bohn, two sisters-in-law and two brothers-in-law, 13 nieces and nephews on whom he doted, and 19 great-nieces and nephews. Among the things that warmed Andy’s heart and brought him joy were generous servings of Mom’s meatloaf; traveling the interstates in Dad’s long-haul, 40-foot rig; baseball in general and the St. Louis Cardinals in particular; the love and company of Charlie Bear, his beloved Labrador companion; the intrigue and strategy of fantasy football and baseball leagues; honoring the nation's veterans and keeping their stories alive; and angling for Bass on scenic waters like Lake 33 at the Busch Wildlife Preserve. In keeping with those interests, the family asks that, in lieu of flowers, you consider donating to: Project Healing Waters https://projecthealingwaters.org

Andrew William Burns July 27, 1962 - October 31, 2021 Andy Burns was born July 27, 1962, in Kirkwood Missouri, the youngest of five and the only one not born in Indiana. His childhood was the perfect mixture of suntanned skin, outdoor fun,... View Obituary & Service Information

The family of Andrew William Burns created this Life Tributes page to make it easy to share your memories.

Send flowers to the Burns family.