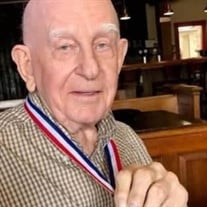 Albert Joseph Rueschhoff , 97, Arnold Albert Joseph Rueschhoff, 97, died at The Woodlands of Arnold on April 1, 2022. Al served in the Navy during WWII and The Korean War. During his service, he worked as a diesel mechanic aboard the Navy Ship LST-605. Al was an active member of the Boy Scouts of America as an Assistant Scout Master. He was a member of the St. Mary’s Men’s Club. He belonged to the Knights of Columbus and was a career diesel mechanic. Albert was born June 26, 1924, in St. Louis, MO. He was the son of the late Elsie (Range) and William Rueschhoff. He was proceeded in death by his wife of 59 years Imogene (Crowley) Rueschhoff. He was also proceeded in death by Andrew Rueschhoff (son), William Rueschhoff (brother), Paul Rueschhoff (brother), Victor Rueschhoff (brother), Robert Rueschhoff (brother), James Rueschhoff (Brother) Colette Stelman (sister). He is survived by his brother Tom and two sisters Cecilia (Brandt) and Betty (Adams). He is also survived by his four sons Jerry (Marcia) Rueschhoff of Houston, TX, Mark (Kathryn) Rueschhoff of Fenton, MO, Steven Rueschhoff of St. Louis, MO, and Jeffrey (Kaye) Rueschhoff of Arnold, MO; 6 grandchildren and 7 great-grandchildren. Al was a devoted Catholic and a lifelong learner. He loved his country and his family. He was a member of the Teamsters Local 618 and the International Association of Machinists and Aerospace Workers 777. He loved to teach his grandchildren and anyone who would listen how to swim and tie the perfect knot. He was an avid scuba diver and long-distance swimmer. Everyone who met Al was touched by his kindness and intrigued by his life stories. He will be truly missed. Visitation will be held at Immaculate Conception Church - Arnold 10am with Funeral mass at 11am Full Military Honors for Albert will be held at Jefferson Barracks at 1:00 pm. A family gathering will be at 2:00 at Andres, 4254 Telegraph Road. In lieu of flowers, donations may be to The Boy Scouts of America www.stlbsa.org or Immaculate Conception Catholic Church of Arnold, MO www.icarnold.com

The family of Albert Joseph Rueschhoff created this Life Tributes page to make it easy to share your memories.

Send flowers to the Rueschhoff family.